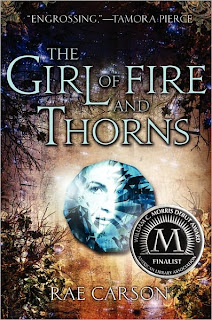 This is my 16th book for the YALSA Best Books reading challenge. I put this book on hold almost two months ago when I first started looking at what books I might want to read for this challenge. I can see why there are so many people reading it.

There is so much going on in this book. First of all you have a younger Princess named Lucero-Elisa de Riqueza who is from the Kingdom of Orovalle. She marries King Alejandro de Vega of the Kingdom of Joya d’Arena. Elisa doesn’t understand why she has been married off so quickly to someone that she meets moments before she marries him. To make matters even more complected her new husband asks her to keep their marriage a secret as when they travel back to his kingdom. And that isn’t the only secret she must keep. She is a chosen one, the bearer of the Godstone (a blue jewel that is lodged in her bellybutton). The Godstone is alive and responds to prayer, senses evil, and is rumored to have God’s power behind it. With so many secrets, this insignificant princess doesn’t feel up to the task. And this is only what you learn in the “introduction” chapters of the book.

Then you are thrown into palace intrigues, political warfare, wondering why her husband married her before Elisa is kidnapped and taken to the edge of war where a small band of rebels hope that she can figure out how to use her Godstone in time to save them and her new husband’s kingdom. Needless to say this book has loads of action as well as the character development of a girl trying to become a secret Queen as well as the chosen one of her God.

I liked it. I really did. Which surprised me a little bit. And I’ll get into why it surprised me after the “spoilers” warning. But first the bits of why I liked it that won’t give away too many plot details. I liked Elisa as a character. She felt real. She felt vulnerable. She did what she thought she needed to do even though she didn’t want to. I liked how the book felt real. Elisa’s life was messy and she didn’t know how to make everything perfect. She did the best she could–which included some mistakes as well as triumphs. This goes for the conclusion of the book as well. There isn’t a neat conclusion to the book–and I didn’t really expect one since this is the first in a trilogy. But I felt a sense of how far Elisa has come from the disaster of a princess that she felt like at the beginning of the book.

All right, so why was I surprised that I liked this book? First of all because I have some friends who had warned me that the romance and the “happily ever after” feeling wasn’t in this book. And I could see why they said that. She marries a man who doesn’t love her and only did it for the good of his kingdom. He said at the end of the book he could have learned to love her. And I really believe he could have. But I think Elisa needed the time away from him to learn to love herself before she could be in a position to let the king close enough to love her without her being star struck by the fact that he was the handsome King Alejandro.

Also, there was Humberto. I really liked his character and I liked how he and Elisa connected. But, I am really not one for my characters (ore people in general) to go against the marriage vows that they make. I liked their relationship and the way that Elisa let her guard down around Humberto so that she could be herself…but I felt uneasy the closer they got to declaring their love for each other. But then Humberto died and Elisa went back to King Alejandro. You would think that they could have the “happily ever after” ending since they both learned to appreciate each other. But I didn’t really think that Alejandro deserved Elisa. I mean, he had a mistress and basically didn’t even hide that fact from Elisa. Remember that whole marriage vow thing I take seriously? Well, Alejandro didn’t and it bothered me. So when he showed signs of changing I was glad. Then he did something heroic and I was even gladder. (Is that a word?) And then when he died from his action I was glad he did something heroic. I was sad he died. But I wasn’t super sad. Because he was a wishy-washy King who couldn’t make a decision without hours of talking first.

Then, there is Lord Hector. He was the King’s personal guard. The King’s man of arms. The first time he helped Elisa down from the carriage she told him what for (he didn’t address her properly and she was nervous and embarrassed). And then he did what made me like him from nearly the beginning of meeting him. He paid attention to her. When the group was ambushed on their way to Joya d’Arena Lord Hector paid attention to what Elisa did. How she saved the King. How she saved her nurse and lady in waiting. And from that moment on he respected her. He treated her like his Queen, the wife of his King. I don’t think anyone else did until the end of the book. He always was there to help her figure out court life. He helped her build a good relationship with Alejandro’s six-year-old son. He looked out for her when she was in danger. And he kept his distance. I suspected that he might have turned his “skeptical, mocking” feelings that he had when he first met her to something of respect and then to something very fond. But she was his Queen and he didn’t take liberties with her like Humberto did.

Now that Alejandro isn’t in the picture…I am hoping that the one person who saw her for who she really could be from the beginning will become more of a romantic interest. Because the two that were in this book didn’t totally deserve her or couldn’t have her. And when the book ends with Elisa’s “cheeks feel[ing] hot, and [her] hands…sweating” when she talks to Lord Hector…I can only hope that the real romance is on it’s way in book two and three of the trilogy. I look forward to reading them. 4 stars.

Book Discussion Questions:
How do you determine worth and value in a character?
The King often shuns making big decisions. How is not making a decision in essence making a decision?
Compare King Alejandro with Humberto.
Why did Elisa become a chosen one? Why does she have the Godstone?
Elisa said, “You [speaking to Ximena] didn’t need to be chosen. But I would have done nothing, become nothing, were it not for this thing inside me. So you see, God picked me because I was unworthy.” (pg 422) What does she mean? Do you agree?
Why did Elisa’s view of herself change over the course of the book?