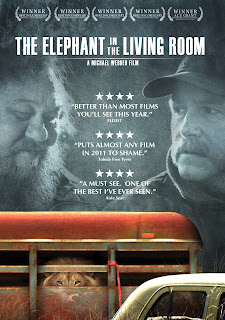 I don’t watch a lot of brand new movies. I have tried really hard to only head to the theater about once a month or so. Plus I wait until something comes out on DVD and I check it out from the library. Well, the other day a patron came to the library to ask to put a movie on request. She didn’t know the name of it, but she knew what it was about. After she told me about the movie, I couldn’t wait to put the movie on request.

So this is a brilliant documentary that focuses on the story of two people. One is a police officer named Tim Harrison who is concerned about the public safety of those that live near people who keep pet cougars or bears or whatnot. And he is also concerned about the animals’ well-being seeing how many of these animals are locked up and live in less-than-idea circumstances. Tim is also an interesting person because he knows what it is like to raise exotic pets. He had some himself. But he also had a friend who died as a result of being bitten by his exotic snake that was very poisonous. The second person is Terry Brumfield who has two African lions that he has raised, who he is very attached to. Even though he has come under scrutiny from his male lion (Lambert) escaping and chasing cars on the highway, he does not want to give up the two cats that saved him from a deep bout of depression.

It is an interesting issue that I had no clue about. I really thought that wild animals were mostly kept in the wild. I knew that some were not, but I assumed (wrongly) that the animals that weren’t in the wild were in zoos or being raised for stunt animals in Hollywood. Boy was I wrong! This also makes me wonder if the bear I saw in Olympia last summer while riding my bike was really a domesticated house pet…or if it was really a wild animal in the heart of our city.

This is a movie that I had to watch twice, just so I could watch the director’s commentary to hear even more back story to what I already watched. Then I loved watching the special feature of the Untold Stories…wow. All I can say to watching that part is wow.

So, if you have an extra 96 minutes to watch a documentary…this is the one to watch. Amazing. Simply amazing. (And don’t you love the image of Lambert peering out of a horse trailer on the side of the road as the cover image? What would you think to seeing a lion staring at you as you drive down the street?) Seriously, you have to watch this documentary!

Now, excuse me while I go and put Second Hand Lions on hold at the library…