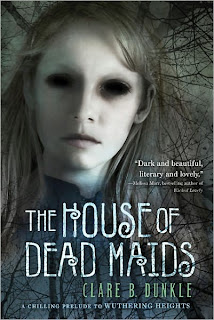 This book is just a bit creepy. So Tabby is sent to be a maid at a strange house. There her young charge doesn’t have a name but is “a heathen git” who wants to be a master who is in charge. Not only is Tabby unsure about what her role as a maid is, she is increasingly startled when she keeps seeing dead maids and other things that haunt Seldom House.

Eventually readers discover how Tabby is connected to the Bronte family and that the young charge is the one who will become Heathcliff.

I liked how the literary world, historic world of the Brontes and the supernatural were all thrown in together. The descriptions were just creepy enough that I could keep listening to the audio while not being so creepy that I needed to turn it off or take a break to ground myself in reality (aka a world without ghosts). But I did wish there was just a bit more. I liked the book, I did. However, I think it could have been just a touch more of a powerful story if the ending wasn’t a “and we lived and here is how Heathcliff came to be” type of ending. I almost expected more of a shiver-experience at the end.

Book Discussion Questions:
What is the definition of creepy? Does this story qualify? Why or why not?
Why did Tabby see ghosts and the “old maid” couldn’t?
Why were there so many ghosts?
Why would the town go along with the scheme?
Did it make sense how Heathcliff became a real character? Did it work?
Did the young Heathcliff in this story work with the character Emily Bronte made?

2 thoughts on “House of Dead Maids by Clare B. Dunkle”