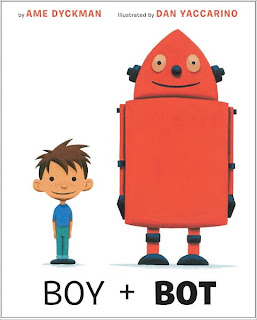 Boy + Bot
By Ame Dyckman
Illustrated by Dan Yaccarino
Alfred A. Knopf, 2012
ISBN: 978-0-375-96757-3
Format: Picture Book
Ages: 3-6 years
4 Stars
A boy was collecting pinecones when he met a robot. When the boy asked the robot if he would like to play the robot responded, “Affirmative.” And so play they did. When the bot’s on-off switch was accidentally hit the boy was worried and tried to take care of bot. When the robot was turned back on and the boy was asleep the bot was worried and tried to take care of the boy.
This is a fun story about friendship and what good friends two very different things can be. The illustrations are great. The curves of the humans and the strong shapes of the bot illustrate just how different they are. I love the subtle humor as well. For example in one illustration it shows a picture the boy made of the robot hanging on a refrigerator and a picture the bot made of the boy under a magnet on the robot’s stomach. This one is sure to be a classic. Should I go read it again? “Affirmative!”
What to Do After Reading This Book:
Pretend you are a robot. Do things with a robot voice and a robot walk.
Draw pictures of a robot.
Make yourself a robot costume out of old cardboard boxes.
Make an invention out of random things around the house.
Play tag where you are robots that have to be turned on/off like a robot’s switch.
What Kids Will Learn:
Best friends are always a little bit different.
It is good to take care of each other.
Listen to grown-ups. Inventors and Parents know what to do when there is a problem.

Good friends are always the best people to have with when playing.

One thought on “Boy + Bot by Ame Dyckman”