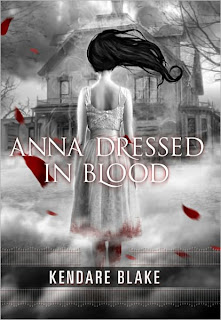 Anna Dressed in Blood
By Kendare Blake
Doherty,2011
ISBN: 9780765328656
Format: Audio Young Adult Book
Ages: 14-18 years
4 Stars
Cas Lowood is off on a new job—he is one of the few who can kill the dead. His new job is a ghost named Anna who wears a dress of blood. She is unlike any other ghost he has yet killed. She is more powerful and aware of what is happening around her. Her power concerns him. Her awareness intrigues him. When his initial contact results in a death of one of those with him, Cas knows that this will be his hardest assignment yet.
This is truly a great bit of storytelling. The way the new ghost lore is woven into the story is brilliant. I loved seeing how Cas’ world drifted around the laws of ghosts and what they could or shouldn’t do. And the romance! I have yet to see a paranormal romance where one of the characters was dead and there was no escaping the fact that she could never become alive again. With the other paranormal romances there is some eternal life factor that gives the relationship some sort of hope. Yet I found myself hoping for the romance even though her evil deeds as well as state of dead-ness made it near impossible to have any hope. And I just had to like Anna. She was quite the evil ghost when she had to be, but she was also quite sweet and understanding of her position as a ghost. Blake has written an intriguing ghost story that will spook you so much you will love it. Just don’t listen to it late at night when you are in an apartment alone the way I did. I sure had some interesting dreams that went along with my heart palpitations…
Book Discussion Questions:
Why was Cas drawn to Anna’s story even before he met her?
What is good? What is evil? Can a person (or ghost) be both? Why, why not? Give examples.
Why did Will break the circle and steal Cas’ knife? Why was he angry with Cas for something that Mike tried to do to Cas?
Describe Cas’ relationship with his mother. Why did she let him do the things he did?
Is there an after life? Where did Anna go in the end?