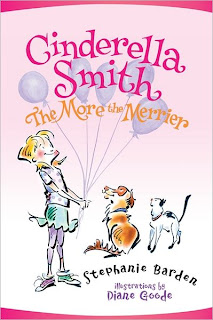 I have such a soft-spot for all things Cinderella. And although her name is Cinderella, she only has a few shoe mishaps in this particular book. Mostly it is all about the characters and interactions this go-round.

Cinderella and her class-mates are going to participate in a spelling bee. The third, fourth and fifth graders are all able to participate. Each class has their own spelling bee and the 3 class winners will all go on to compete in the school bee. The winner of the school bee will be able to plan a special class party to celebrate. Both of the Rosemarys are just as obnoxious as ever. They form clubs and tell everyone who can and can’t be in them. Also they get upset and angry when everyone doesn’t agree with their idea of what a perfect class party theme would be (unicorns). When Cinderella decides that she will ignore Rosemary T. (who used to be her best friend until she got too mean) Rosemary retaliates by telling mean lies about Cinderella’s aunt. Cinderella must learn to not only juggle practicing for the big spelling bee, she must figure out how to handle an ever-increasing distance between her used-to-be best friend.

This book proves that this series will become a good staple for young chapter book readers. The situation and struggles are spot on for the age and interests of the characters. Cinderella is a solid character that many will like. (Even though she has a very princessy name, she has loads of interests that aren’t super girly. For example in her classroom she sits at a table with three boys and they enjoy making up words and talking about bugs and dinosaurs.) If the tomboys and boys in school are okay reading a book with a pink cover, they will really enjoy learning about Cinderella Smith’s antics.

Book Discussion Questions:
Why did Cinderella stop talking to Rosemary T.? Was that the best way to deal with the situation?
Aunt Flora believes that weird is a good word. What does “weird” mean? Is it good or bad when people are described as “weird”?
There are a lot of careers that Mr. Harrison had people talk about in his class. What career sounds interesting to you? Why?
What is a “The More the Merrier” party? Why did that party theme work so well?