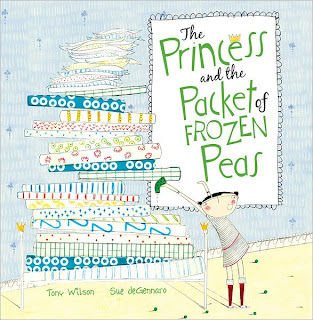 There once was a Prince called Henrik who wanted to make sure he married the right person. He saw that his brother married a “real” princess because he did this test where you put a pea under a bunch of mattresses. Well, he sure didn’t want the same type of girl that his brother married, so he decided that he wanted to marry the “exact opposite” of the type of girl his brother married. He wanted to marry someone who liked “hockey and camping and [had] a nice smile.” So he thought if he put a whole bag of frozen peas under one small mattress than he could find all the prissy girls and avoid them.
Then along came his friend Pippa who liked hokey (think field hockey) and spying on his sister-in-law (the real princess) and laughing. He put a bag of frozen peas under her thin camping mattress. And she loved them! She thought they were the perfect thing—an ice pack—for soothing her muscles after a long day of playing hockey. So the Prince and Pippa lived happily ever after.
What a spectacular twist on a fun fairy tale! This shows that Henrik had some great powers of observation in seeing what his brother had and knowing just what he wanted. It also shows that playing hockey and being compatible are more important than looking like a princess or becoming a princess. And it shows that princesses (or “unreal princesses”) are just as much fun as the princesses who have all the fancy dresses. Plus they can do things and be themselves. Oh how I love twists on fairy tales! And this is totally one that should be read over and over again to all the little girls who are princesses on the hockey fields!
What to do after reading this book:
Play a game (hockey, soccer, baseball, etc.) with friends and family.
Go camping. Or better yet go camping in your living room and sleep in a sleeping bag inside the house.
Talk about things that are important to you.
Have a smiling contest. See who can go the longest without breaking their smile.
Play a mini game of hockey with frozen peas on a cookie sheet. Flick the peas with your fingers to make them move on the “hockey field”.
Make your own adaptation of the Princess and the Pea. How would you find a “true” princess? Play-act your adaptation and pretend you are searching for the “princess” or are the “princess” in your adaptation.

What kids can learn from this:
Adaptations are variations of classic stories. They are stories with a twist. (And can often be more fun than original fairy tales.)
It is just as important to be a happy, hockey-loving girl as it is to be a “real” princess.
Being happy is the most important thing. (That and that frozen peas are useful for ice packs…)