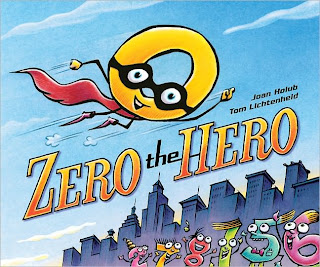 Have you read Emergency yet? It is this brilliant book about the alphabet letters and what happens when the letter “E” gets injured. Well, if you haven’t read that…consider it added to your to-read list. Seriously. It is hilarious! Anyway, this particular book is that level of comedy but with numbers. Oh yeah, numbers are just as important as letters.
So all the various numbers are gathered around and are talking about this or that. And Zero says, “From now on, call me Zero the Hero!” because he wants to be a super-number…or hero rather. All the other numbers laugh or disregard him and go on to prove just how “worth-less” zero is. Of course when Zero is told over and over again how insignificant he is, there is nothing to do but disappear. Then along comes (dun dun dah!) the evil Roman Numerals. They are taking all numbers captive and forcing them to become Gladiators in their giant gladiator (clock) ring. Who will save them? Who can conquer the evil Roman Numerals? Zero the Hero! With his amazing ability to do times tables he is able to save all numbers everywhere! (Huzzah!) Where would we be without this magnificent number? And where would we be without this superb book? Seriously, why haven’t you checked the book out of the library already? 5 stars (but don’t tell Zero, he doesn’t understand why zero stars is not the epitome of perfection).
What to do after reading this book:
Play counting games with cereal or pieces of candy. See how many you can count. And then more importantly how fast you can get them to Zero!
Look at a traditional clock. Count all the numbers.
Make your own gladiator (clock) ring. Put a rope around a large area. Then place numbers in the “clock” positions. Have one person hold a broom handle a couple of inches off the ground while standing in the middle of the “clock”. Then have them turn “clock-wise” in a circle while moving the broom handle. Make everyone else jump over the “clock-hand” while it moves around the circle.
Learn to count to ten by using roman numerals. Make a matching game with the roman numerals instead of traditional numbers.
Make a cape out of a blanket or towel and go “save” other “numbers” around the house (or the gladiator clock ring).

What this does for children:
Learning about how numbers (and letters) work together helps kids understand that small characters can be put together to represent larger ideas.
Learning that numbers can be represented in multiple ways (traditional numbers or roman numerals) can help readers understand that different characters can represent the same idea.
Readers will learn that no one (or number) is insignificant. Each person (or number) is just as important as everyone else.